Imagine this – I had bailed that morning from the Art Loeb Trail (see story here). I am feeling downright crappy because I can’t believe I failed and also a bit worn out.

It was almost nine o’clock on that Saturday night and I am trying to cheer myself up on Twitter. I scroll through my feed and luckily notice the unobtrusive tweet from Russell Davis, “Who is in Asheville?”

I replied with this gif:

A few minutes later Russell Dm’ed me. He asked if I might be interested in a small group or private mixology lesson as he’d had a cancellation in South Carolina and was cutting through Asheville on his way to West Virginia.

It was late on a Saturday night so no way to obtain any alcohol. All I had in my house was some funky flavored vodka and some inexpensive tequila. How in the world could he provide a mixology class with that?

ABC stores are closed on Sunday as well. I tried to see if my daughter could get her boss to let me rent the bar beside the restaurant where she works. She couldn’t get a confirmation so it wasn’t looking good.

But Russell and I switched to text and finally came up with a plan.

Mixology lesson with my tequila, then I’d take him on a brunch time bar crawl in Asheville. He could experience Asheville and he could teach me more about bartending along the way.

The next morning after I returned from church, Russell stood in my kitchen and took me through the simple but deliberate steps to a marvelous margarita. 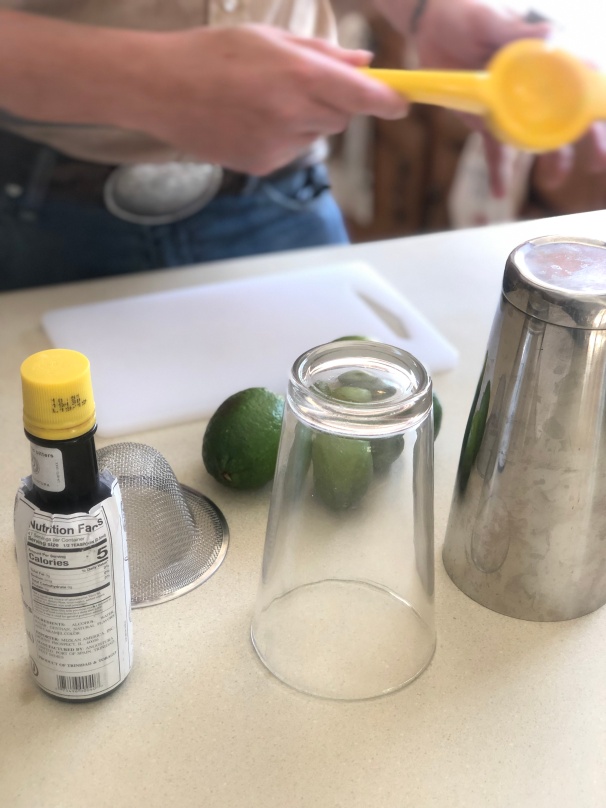 He showed me how to cut and juice the lime, as well as only wetting half the rim of the glass before salting so the patron has the option of sipping from a non-salted side. Then he explained how to measure the tequila properly where the jigger is full to “almost” over the rim. He used brown sugar instead of simple syrup.

He explained that this combination of liquor, bitters (sometimes its lime or lemon juice), a sweetener and water (diluted ice) are how a cocktail is defined. Everything els else is just a mixed drink.

Then he topped with ice and demonstrated how to take a sturdy mixing glass and slam it into a cocktail shaker (this is a Boston style shaker set up), then proceed to shake the liquids just right. The technique looked so elegant and effortless. Then he strained the liquid into a hi ball glass (that he’d already prepped with the salt half rim) and slid it over to me for a taste.

Margarita marvelousness. I sipped contently while he rinsed everything.

He gestured towards the set up with a cheeky grin. That grin was going to signal lots of shenanigans throughout the day but currently meant it was MY turn to mix.

I repeated his steps slowly with lots of uncertainty. Managed not to overpour the jigger of tequila. Only dropped half a dozen ice cubes on my feet from my ice maker. Although dangerous looking at first Russell corrected my shaking technique not to be aimed at his head. 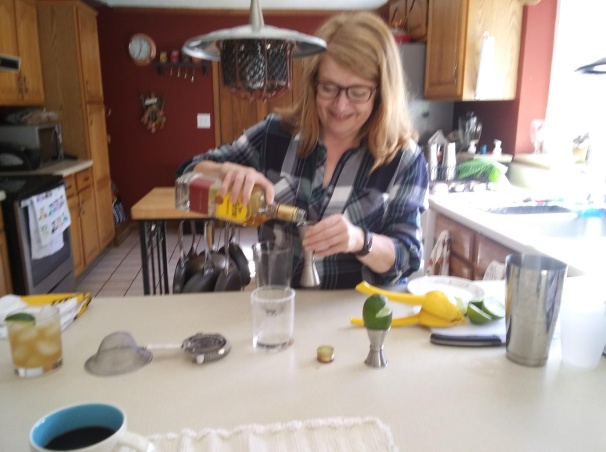 I strained into the other hi ball glass and slid it towards the mixing master. He raised the glass then drank a bit and nodded approvingly. We finished our respective glasses and headed out the door towards downtown Asheville.

Part of the added value of Russell’s time was just talking. As I drove us along I-26 I pointed out the back of the Biltmore estate and gave a brief history of how the Vanderbilt family had established Asheville as a soon to be sought after destination all the way back in the late 1800’s.

He shared with me how he’d started bartending in college and decided to make it a career to his family’s dismay. A family that would later both discount his achievements while trying to benefit from his success.

Soon we were in downtown, parked at the Aloft Hotel so I could show Russell one of the many roof level bars in Asheville. Then we headed up Biltmore Avenue stopping in front of windows along our way to Sovereign Remedies.

We reached Sovereign Remedies too late to eat but did share a mostly locally sourced cocktail, the Side Eye, that Russell picked out.

It was delicious including Hazel 63 Rum and Bechrovka Pumpkin Pie Orgeat, but when we headed out he asked me if I noticed there was something missing. I had watched the bartender mix and didn’t notice her make any obvious flubs.

He prodded me further, “She didn’t add one of the ingredients.” I still was stumped. As we walked along Walnut, he finally enlightened, “She skipped the lime so it wasn’t completely balanced.”

One tiny detail that most of us would miss. Not Russell.

Next up on the cocktail (and much needed food) tour was Mountain Madre. We took advantage of the lovely weather and sat on the back patio. Ordered some soft tacos to share and then he schooled me on the difference between Tequila and Mezcal.

Mezcal must be 100% agave and has a distinct smokiness. Most originates from Oaxaca and has to be bottled in Mexico. He ordered me a mezcal neat (not mixed with anything) but with sangrita (not to be confused with sangria the fruit laced wine). Sangrita translates to “little blood” and is a non-alcholic chaser of fruit (like pomegranate, lime, orange) or tomato juice and chile or hot sauce. Mine tasted almost like a liquid pico de gallo and was delicious with the Mezcal.

I am officially now a Mezcal fan.

Once we had our tacos and I knew I wasn’t going to end up drunk (I was a little concerned until the food off set the alcohol). I decided to add another experience to our afternoon escapades, The Chocolate Fetish.

Russell was impressed with the beautiful chocolates and I asked if he wanted anything. He was going to pass since we both were full on tacos but I insisted on ordering two truffles. The Dragon’s Blood and Ancient Pleasures. I handed both to Russell and he smiled, “Which one first?”

I indicated the one with the black and white sesame seeds. He bit off half and handed me the remaining half.

His eyes widened as he tasted it fully. His eyebrow arched, “It reminds me of Sushi?”

I nodded and acknowledged, “Wasabi.”

He repeated with the other truffle. “Ah, chili pepper.” As I swallowed my own bite of heated chocolate I nodded again.

Then we walked the distance further around Haywood to the Hyatt Place and up to Montfort Rooftop Bar.

The view was exceptionally sunny and beautiful. While Russell went to the bar to order us cocktails I grabbed us a spot on the outside terrace facing Mount Pisgah.

He handed me a lovely champagne style glass of golden yellow liquid, The Bombini and he raised his hi ball glass of glowing orange, Recipe for a Ghost. We clinked and agreed it as cheers to a lovely liquor learning afternoon.

Thanks to Bar Rescue and Twitter for connecting Russell and I. It was taking a chance to a share an adventure that resulted in a once in a lifetime experience for me. A #50for50 that wasn’t on the list but definitely was a worthy addition I’ll never forget.