My mother insisted instead of my original plan to travel solo to the NC coast for my vacation that she would like to go back to Florida.

I agreed because of course I had at least TWO ocean related items on my #50for50: surfing and parasailing.

I was relieved not to have to go solo and the trip became a full blown girls trip of my mother, sister, daughter and I driving together to Santa Rosa Island, FL – just east of Destin/Ft. Walton Beach.

You have to understand what a nostalgic trip this was for me. I grew up going to the panhandle for vacation since it is the closest coastline technically for Nashville and middle TN. From Pensacola to Panama City is AKA the Redneck Riviera because of the amount of southeastern visitors along its sugary white sand beaches.

We left on Sunday Sept 22nd in a relatively small rental car for 4 grown women on a beach vacation. Packing the trunk was like Tetris. 4 moderate to full size suitcases. Makeup bags (ok so Alex ended up having to put her Hollywood approved makeup kit up front on the floorboard). Beach bags (with more sunscreen than average since we are 4 very pale, very sun sensitive ladies). Diet food because we were ambitious enough to think we’d stay on plan. Plus a full size box fan since my mother and sister need ambient noise/air flow where ever they travel (although I am moderately sure neither have tried to check these on a flight lately).

Once packed up at my sister’s house it was I-840 from Murfreesboro to south on I-65 out of TN, through most of Alabama, then we followed GPS into the wilds of rural south Alabama (where I was delighted to see how cute OPP, AL has become). Finally just before dusk we made it to our Airbnb on Santa Rosa Island, FL.

The rest of that evening was discovering the joy of Walmart pickup AND Walmart liquor store (Florida is so lucky!) while navigating the orange cone confusion of the Hwy 98 construction project. Then the next day I was able to get my big goals of sunrise on the beach, scheduling my surfing and parasailing adventures for Tuesday and Wednesday morning, plus my very first open water swim.

For the record folks, I have waded in the ocean and played in the surf from a young age (also snorkeled once in Jamaica with a life jacket). But I had never ever “swam” out into the waves. If you missed it from earlier this year, in preparing for my sprint triathlon I had to learn to swim first.

You can go back and read about here.

During my training I only used the pool to practice swimming since the Rambling Rose was a pool swim. (More to come on the triathlon – I actually have to go back and write about it.) Swimming in the ocean with cap and goggles felt pretty official but I desperately missed my fins. I didn’t go very far since no lifeguards were present but also felt pretty confident in water over my head. 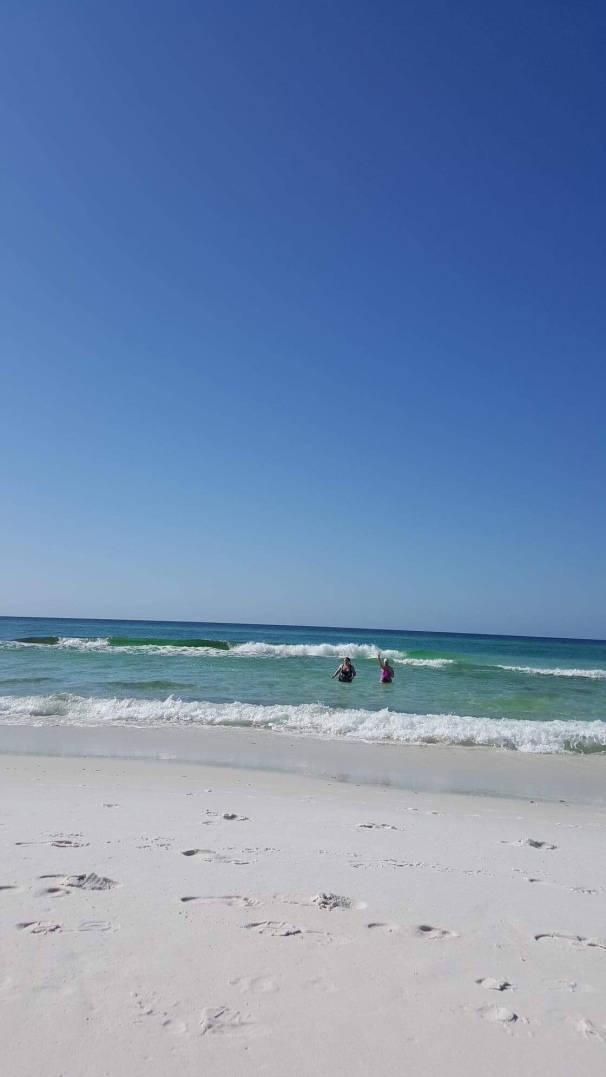 The next morning Alex and I got up early and drove to Park East in Pensacola Beach for our surfing lesson (far eastern reach of Pensacola just next to Navarre). It was a long drive in rush hour traffic but once we stepped out into the parking lot of the nearly empty park I felt a surge of excitement.

Soon our instructor, Braden arrived. He looked, sounded and acted exactly like the surfer dudes in the movies. Except no zinc oxide covered nose or Sean Penn inspired Hawaiian themed shirt.

He brought us wider Fresh Pineapples boards and carried them to the beach for us while we finished putting on sunscreen for 2nd time that morning (did I mention we burn easily?). I was both surprised and a bit dismayed that our shore surf training lasted only 10 minutes and Braden said, “let’s wade out and see what waves we can find”.

I had no concept of how difficult it is to stay balanced on a board. On your belly. With the tiniest (and I do mean tiny as the waves on the Gulf of Mexico were barely whitecaps for most of the time we were out there) of wave action.

Getting onto the board while in chest deep water that moves is challenging but staying on the board was even more so. However after a few get on, roll off, get on, thrown off cycles I managed to start floating on the board and anticipating the undulation well enough to stay on.

Did I mention I hadn’t even tried to ride a wave and pop up yet?

Here’s a synopsis of how that went. Together Braden and I would watch for the next “big” wave in the distance, then I’d paddle my board around towards the shore. Braden would hold onto the board until just the right time then push the board while urging, “You go girl!”

Then it was up to me to try and pop up to crouching, kneeling, squatting, etc with the goal to stand. Many times I started to crouch only to immediately tumble into the surf.

I was able to get to kneeling finally and ride the board until I hit sand. Still occasionally wiping out and feeling that fun but frightening tumble off into the churn.

Usually dragging my knees or my butt in the sand when I landed my unintended tumble.

I really wish I could say after an hour and a half in that very calm and beautiful water that I mastered popping onto my feet. It didn’t happen.

However I was elated that on one of the final pushes I managed to squat. Like my butt was up and feet balanced when I just grounded too soon. I lacked the time to keep practicing until I could pop up fast enough.

Really wanted to keep at it but Alex was starting to burn and she’d tired a bit of all the falling off and getting on. Braden had alternated his wave watching and coaching between Alex and I for that whole time.

If I’d stayed in the water I am sure I’d have started to burn as well so we pulled the boards back up to the dunes. Braden took some cute photos of Alex and I before we headed off to shower then change to head back down to Destin.

Parasailing was the Wednesday morning adventure and although tired from the previous days of shopping, swimming and surfing, Alex and I worked hard to get to the docks on time.

We barely made it so we could board with the group. Which only made things more interesting over the next 90 minutes while we both suffered full bladders.

The weather was beautiful and clear as we rode out in the parasailing boat from Destin harbor, out the inlet and into the Gulf. The boat was completely full with 14 passengers, captain and one crew man that was charged with gearing each of us up in harness, life jacket at just the right time (and limited amount of equipment).

Alex was more nervous than I’d imagined but I just enjoyed the feeling of the boat speeding up and curving through the water. It had been years since I had been on a boat on the sea. It’s such a wonderful feeling I fell in love with back as a young girl on my parent’s sailboat.

Both of us were excited by the time it was our turn to slide onto the rear deck and get hooked onto the parasail. The smooth transition from sitting to flying and eventually reaching a height of 400 feet above the water was effortless and exhilarating.

Alex was elated and we both began to notice all the sea life below us in the crystal blue waters.

Two little sharks, maybe they were babies but we decided we hoped they were just nurse sharks.

Schools of shiny fish. Plus one big, slow sea turtle.

We could see almost all the way down to Fort Walton and in the distance the sprawl that is now Destin. Once a sleepy little seaside paradise.

Still beautiful, especially from the quiet, cool breezes of a parasail.

The reeling in process was quick. The captain gave Alex and I the requisite “dip” in the water before pulling us back on deck. Although the water up to my waist felt lovely it reminded me that as soon as we docked I’d be sprinting to the nearest toilet.

Which is what we did once we slowly motored back into the harbor.

Damn those no wake laws. Those are only nice when you are a sailboat moored and floating in those wakes.

After potty time we changed into dry clothes and headed back to spend the rest of the day with our family and our remaining beach time.

Surfing and parasailing were so awesome I plan to do both again in the future. It was more fun getting to experience with Alex since she doesn’t get out of her comfort zone as often as she should. I also feel like my newfound confidence in swimming made both experiences less scary – especially the surfing. Hoping next year to learn to scuba dive since I didn’t have time for it this year on the #50for50.