Back near the end of May I knew I needed to check a few more boxes off the old #50for50 (and thanks again to everyone who made my actual 50th birthday so awesome with your wonderful wishes and sweet gifts).

Memorial Day weekend and no plans? Was able to schedule both aerial yoga at Aerial Space and whitewater rafting with Wildwater on the Nantahala.

Saturday morning I almost missed aerial yoga because I underestimated the time it takes to buy expensive running shoes. I don’t know why I thought 30 minutes was enough time to get measured, try on and then buy the shoes.

Granted the fitting is done with fancy computer scans now and the guy at the running store wanted to ask a million questions on what kind of running I do. So the fact I was out of there in 40 minutes with a great feeling pair of new Hokas, is probably pretty impressive.

Luckily traffic was light and I made it into aerial yoga class with 2 minutes to spare.

One other student and myself with the teacher, Lisa Varno. The room was narrow but 2 stories tall with thick wrought iron beams on the ceiling and ropes and silks hanging down in vivid jewel tones.

Lisa measured a hanging silk to my hip bones and had to take a ladder and climb up to let down to my level a few inches. Then we all put out our mats below each of our assigned silks and it started like a normal yoga class. 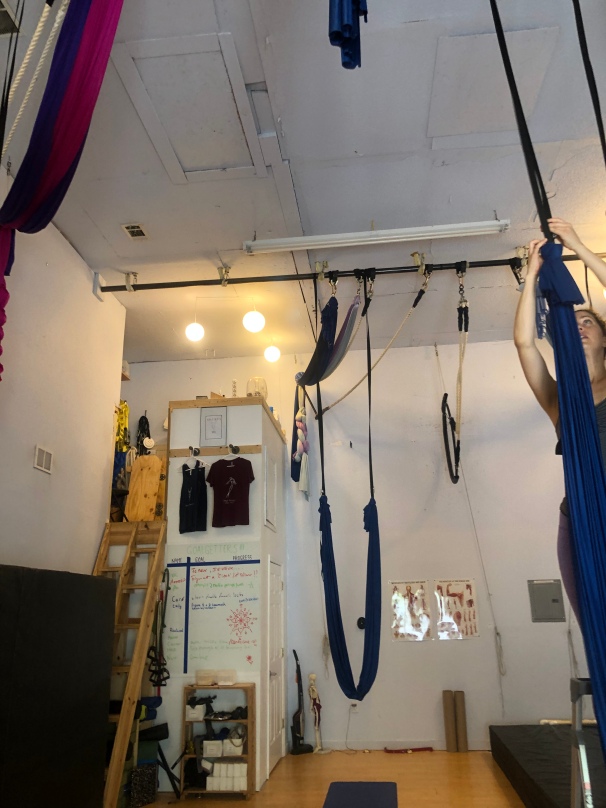 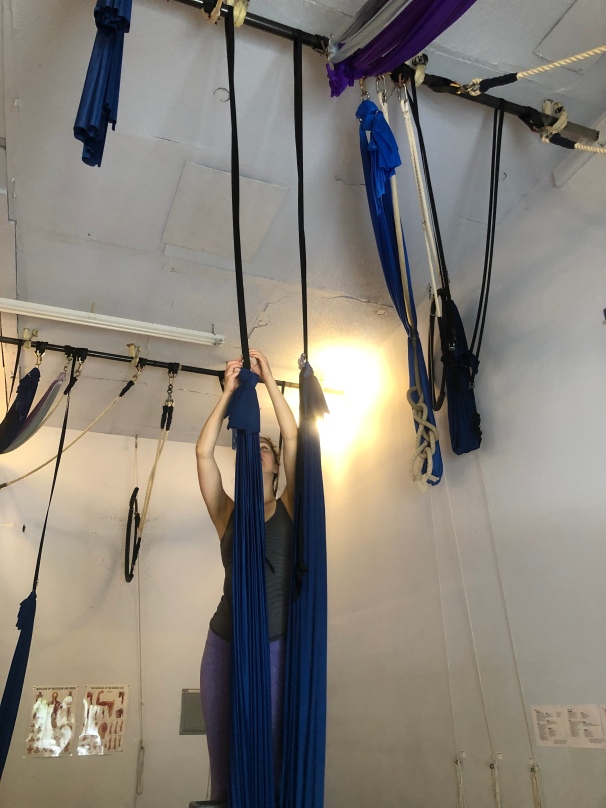 Except as soon as I put one foot in the silk, while I laid on my back, I immediately realized the extra range of motion that the hanging fabric provided. I could swing my leg back and forth far enough to really feel my hip open a bit, without the normal strain of gravity on the raised leg.

Lisa led us through the movements and we used the silks in every pose to support and encourage fuller motions.

Then she introduced some advanced poses – like leaning forward into the seat of the hanging silks and a little bit of inversion as we walked our hands forward. Then we sat in like a swing and pulled the fabric out in various ways – almost like a hammock at times.

Finally came the mac daddy challenge I had hoped for.

Here is how it felt.

1) First form a seat swing with the fabric that resembles a diaper on your rear end with your hands holding the gathered up silk at your thighs.

2) Then lean back into thin air and spread your legs wide to keep from slipping onto your head.

3) Wrap your ankles around the fabric above so your legs look a bit like a pretzel.

4) Put your arms out and pretend to be a monkey hanging there. Or a bird. 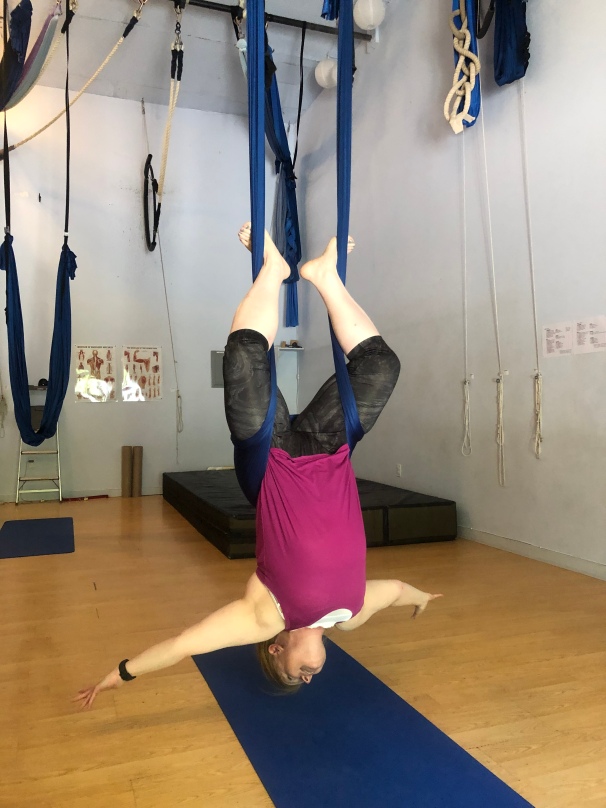 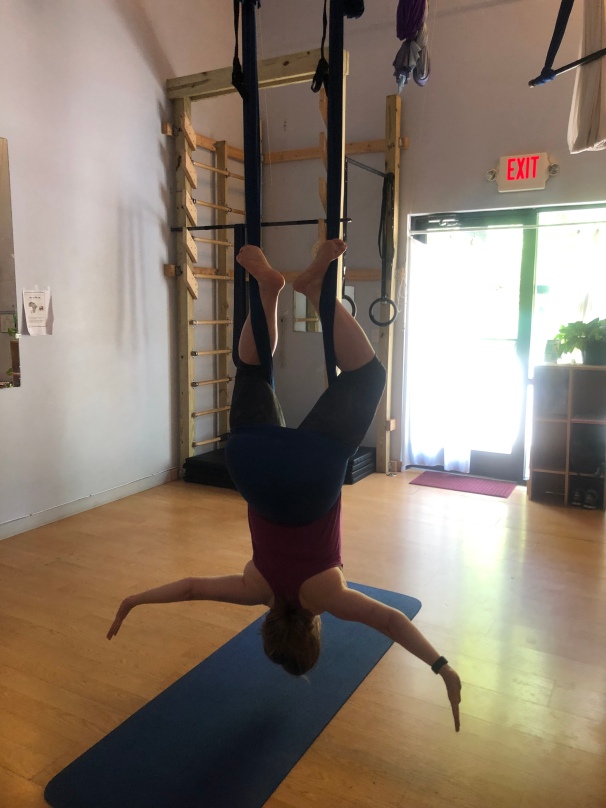 I was decidedly less graceful in appearance. Maybe more like a monkey.

At least it didn’t feel as awkward as the pole dancing experience.

However who cares how I looked. It felt AMAZING. Hanging there and swinging a bit was exhilarating. The stretch and almost weightlessness was just so lovely. I didn’t want it to end.

As long as I have lived in western NC I have looked longingly at the rushing waters of local rivers. I’ve driving up and down the Nantahala River dozens of times and seen rafters and kayakers paddling happily. The water looked so refreshing and relaxing.

I got an email from Wildwater that they had a special on Memorial Day Monday. Apparently because so many people travel home on the Monday there are less visitors on the river. I got my friend Roni Turnbull interested and next thing I know we had almost a full raft of friends. Roni’s son Tristan, her partner, Chris Chavers, and my adventurous friend, Robin Lenner joined us.

We booked the earliest raft ride in hopes we’d still have plenty of day left for other frolicking.

I drove everyone out to Nantahala in my car. I was probably as nervous about that as I was the rafting. However no one got carsick or made fun of my driving. 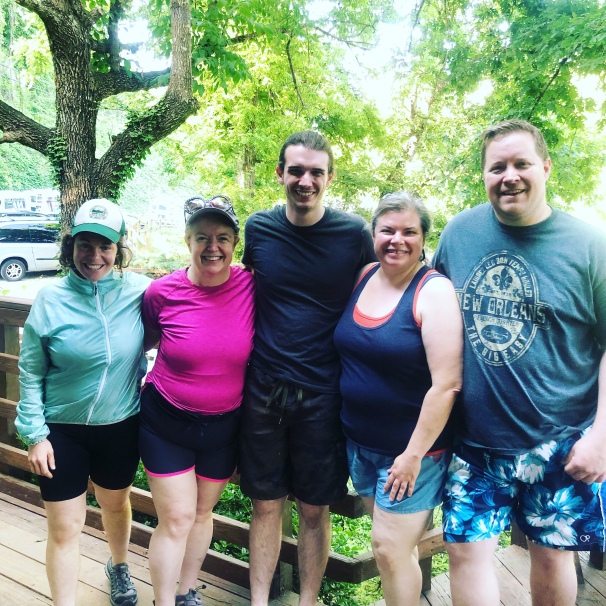 We had to wait for the rest of the rafters to get there for the 9:30 block of tickets but we boarded the bus to travel upriver to the send off point around 9:40, and were on the water by 10.

There were 6 rafts of riders going – each holding 7 including a guide. We only had 6 since Roni and I had mistakenly thought the raft held 6 including guide.

Robin and I volunteered to sit in the very front. Chris and Roni were behind us, then Tristan by himself, and Mark, our guide in the very back. We all carried the raft down the entry ramp and since Mark was one of the most experienced guides the other guides indicated they’d let us be the lead boat. We boarded, practiced paddling for a minute so we could all figure out how to follow directions.

Once all the rafts were out and ready, Mark had us start paddling to take the lead.

I didn’t know what they meant by “you’ll definitely get wet right away”.

But sure enough, within 5 minutes we were in some frothy water that apparently indicated Class II rapids.

The front of the raft pitched up a bit then dipped low and a wave of water splashed Robin and I in the chest and swamped our feet.

This similar water trajectory occurred a number of times – luckily I had on Keen sandals since my feet were soon waterlogged. It wasn’t long before my butt was freezing because the water temp was still hovering around 45 degrees.

At other times the raft just floated along without us even having to paddle. But if we needed to avoid a rock or other debris, our guide Mark would order us to paddle. Once we passed the obstacle he might just say, “That’s great”, which meant stop.

Mark is a laid back older guy with 30 years experience rafting and navigating rivers but even with all that knowledge, he still could misjudge the waters.

We were on the left side of the river and the water wasn’t much faster than anywhere else but we hadn’t been paddling for awhile. I think the river just decided where it wanted us to go and Mark didn’t notice we were bearing down on a huge boulder until it was too late.

All of us were already paddling at his order when we still struck the rock hard enough the boat was pushed high.

Robin bounced up at least a foot off the seat. For a moment I was sure she was going overboard, but was helpless to grab her. I had tried to brace myself but had immediately slid off my seat onto my knees in the bow. Luckily she practically landed in my lap. It didn’t hurt either of us, just rattled us both and Mark had steered us off the rock without the entire raft capsizing.

Robin and I pulled ourselves out of the bow, shaky and soaked head to toe. Our nervous laughter was carried away in the wind.

Along the Nantahala the tree branches grow way over the river and there were plenty we had to duck to miss. The feeling you get with all the greenery and the beautiful bottle green clear water is that you are in a lush tunnel.

For the remaining miles of the trip I felt lulled into a false sense of calm serenity.

We were however, soon facing the final rapid, a class III that is like a mini waterfall. It looks pretty innocuous until you are right on top of it.

It felt like taking the big raft down a short, steep set of stair steps with water pouring over my head. 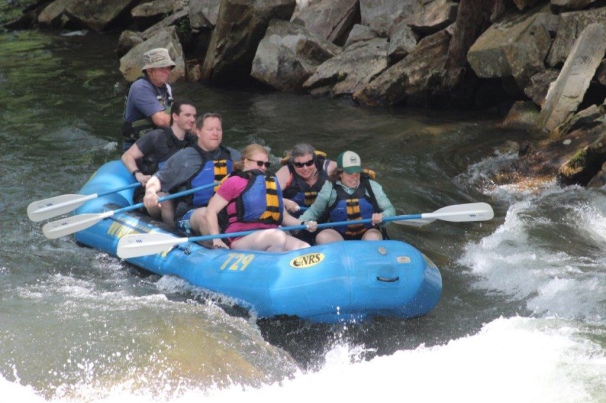 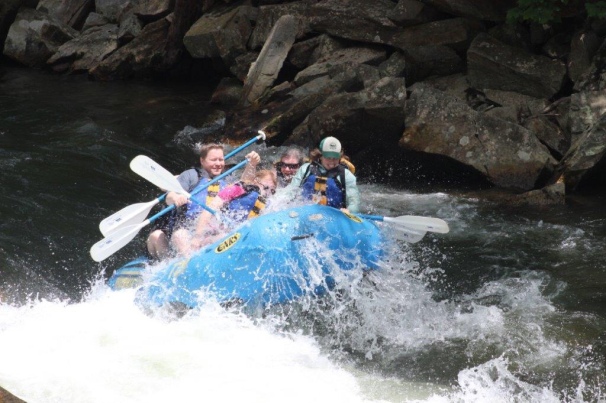 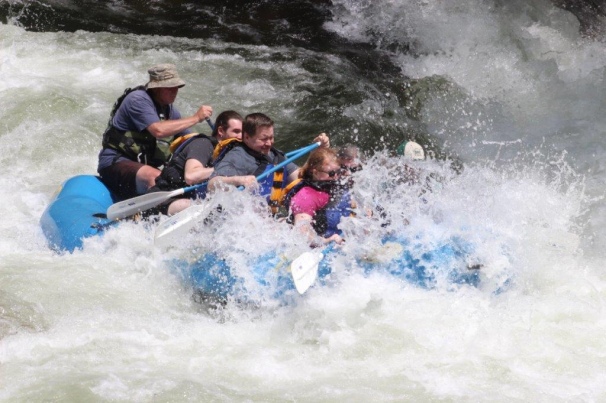 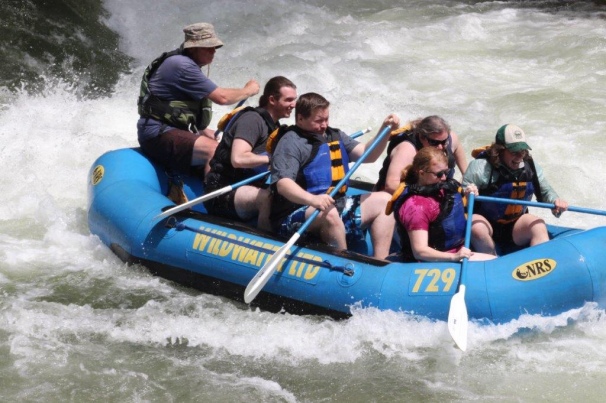 What an awesome ride. Over too soon.

We paddled over to the side of the river so Mark could climb out and go stand closer to the rapids area. He had the emergency rope ready to throw in case any of the other rafts in our convoy had someone thrown overboard. It wasn’t until then that I realized that our raft had traveled own the waterfall without any safety “net”.

The very next raft we watched two young boys thrown out.

It was quicker than my eye could even register. One minute the whole raft was pitching down the waterfall drop and next the two boys were in the water over ten feet in front of the boat. And floating fast but otherwise looked unharmed.

Mark yelled to try and get the boy’s attention. Then threw the rope, the older looking boy in front grabbed…and caught. The younger one behind grabbed onto it too. Despite the crazy rushing water they both led tight and were pulled to the shore.

It was scary to watch but over in just a couple of minutes.

The remaining boats all descended the rapids without incident. Mark boarded our boat and led us to the close by exit ramp. We all piled out, dripping wet and elated.

I probably could’ve fit even more adventure into that long weekend. Now that the weather is warm I know I have to get a lot of these outdoor related #50for50 on the schedule.

I admit I decided on these two simply as knowing I needed to check them off. Which is not at all what I want to feel like about my adventure list. I want to anticipate and relish each one of the items since I felt strongly enough about them to put them on the list.

Which I will mention here is why I am going to be making some changes to the list in the coming weeks. There a few items that I recognize are no longer of interest.

That’s all I will say for now as I want to emphasize how fantastic the aerial yoga (thanks again Dawn Martin) and the white water rafting (thanks to my mother for reminding me it was my late aunt NeeNee’s 50th adventure) experiences were. These are two things I will definitely want to do again.

One comment on “A Weekend of Flying and Floating”