In case anyone is keeping score, I am way behind.

Last Monday when I finished the Perimeter Trail around University of the South and Sewanee, TN that was #9. Six other items are in progress (reading Bible in a year, meditation practice, learning to swim, cooking/making a unique exotic food each month, training for the triathlon, and of course blogging about all the experiences).

However if you do the math I should have completed 16.5 items so far because it is already a third of the way through the year.

All I can say is I better get busy. I know I need to nail down the plans for more of the activities to make sure I can get them all done.

As it was, it took some creative thinking to make the Perimeter Trail* trip happen. I realized that the only 3 planned trips I have to middle TN this year were Easter weekend, a week in August (where several items are scheduled to take place including the Queen concert), and then a long weekend for Christmas.

If I wanted to get to Sewanee to hike the Perimeter trail I had to add onto one of those trips and the Easter one was the only one that seemed doable temperature-wise. I decided to hike it on Easter Monday (which by the way is no longer recognized on any calendars – just what I remember that some of the banks used to observe).

I was lucky that I put the word out to my online hiker crowd to get input on the hike that I found someone willing to accompany me. Although we weren’t well acquainted, Charles, who is training for a 2020 Appalachian Trail thru-hike and lives near Sewanee, was kind enough to volunteer. However Mondays are his wonderful wife’s only day off each week so it wasn’t certain but she encouraged him to come out.

Since I was leaving my parents house that morning to drive to Sewanee I didn’t want to make them get up at the crack of dawn. I decided instead to get to the trail head by 9:30 would still be adequate since I typically hike about 2.5 miles per hour and sunset wasn’t until 7 :45.

The hike starts in woods, already growing lush with fresh leaves and spatterings of wildflowers along the path. We skipped the Piney Point overlook since it was a 2 mile out and back we weren’t sure if we had time to take.

Instead we kept what I felt was a good pace. Although Charles is a little over ten years older than I, it was evident that he’s been regularly hiking since last October in his AT preparations.

I felt slow in comparison but he let me lead for awhile. He kept me entertained with stories of his youthful misadventures and his plans for next years thru hike.

The AllTrails reviews had indicated there wasn’t water on the trail but we quickly realized that was incorrect as there were lots of beautiful waterfalls and water crossings. Nothing that got my shoes too wet since most of the creeks were narrow enough and rocks plentiful to hop across.

The reviews had also seemed to portray the trail as well marked. However we soon realized that wasn’t completely true either.

The first wrong direction we took was my fault because we came to a T but the right hand trail was easy to miss because it doglegged back dramatically. Instead I headed left and we quickly came back to the road we had just crossed, but were just a little farther down. We turned around and were able to retrace our steps.

The next time things got confusing was at a big cross roads where we spent about 10 minutes consulting printed maps, the online maps and walking around in circles. Charles figured out the correct path and we kept going.

Later new signs showed the trail had been moved and we took the path marked although we knew it was going to add at least a mile. We felt like we were making good time. 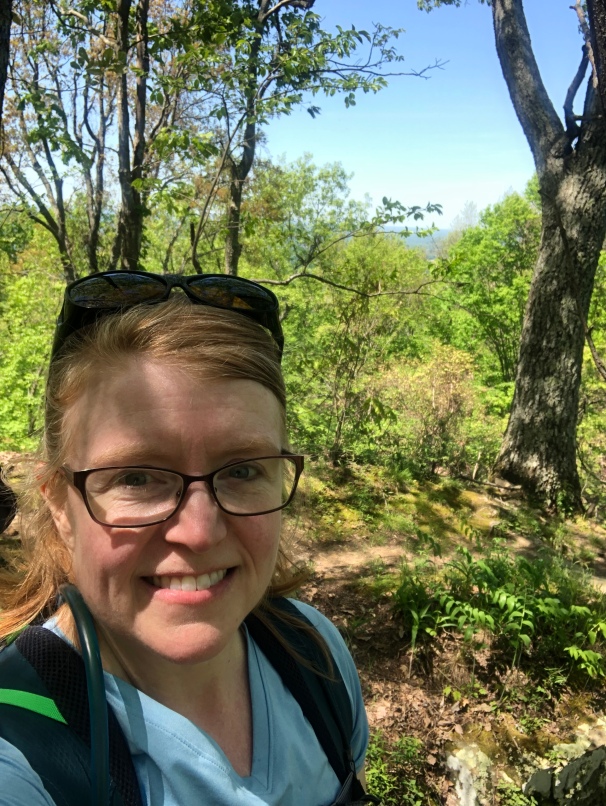 However about 30 minutes after we’d finished the new section of trail we came to a cross roads that wasn’t on our map. Or at least not where we thought we were. Another few minutes of head scratching and conferring resulted in navigating around to the trail farther along. Except the wandering around had probably added another mile.

I started looking at my watch more frequently as I started to doubt that we were going to be back to our vehicles by dark. The trail got more challenging with a bit of rock climbing. Nothing too technical just a lot of stepping up which for a short chick like me is enough to wear you out.

Then a stupid thing happened.

I ran out of water. I had packed two liters in my Camelback and despite the shade of the forest it was warmer than I’d imagined. Suddenly I wish I had thought to bring my Sawyer water filter which I had left at home.

Because after all the trail guide made it sound like there was no water source. We’d already passed or crossed a dozen creeks, waterfalls and even a small lake.

Charles however had brought extra water and gave me an unopened 16 oz bottle.

By this time we were at about mile 17. When we came to another ambiguously marked fork in the trail. This time it was so unclear that Charles literally took about 20 minutes to scout in two different directions to see if he could determine where we needed to go.

Mike had already texted several times checking my progress since he was starting to see how late it was getting. I gave him the frustrating news that I was sure it would be dark before I got off trail.

We came to Morgan’s Cross right before sunset.It was completely gorgeous in all directions and the fading light enhanced the view. 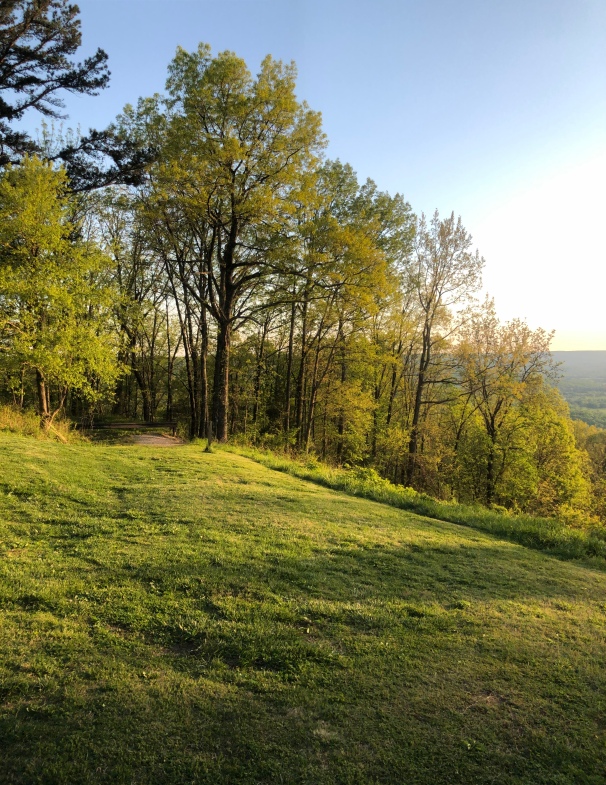 Once we headed off the ridge I was disheartened to realize we still had three miles to go.

I tried to walk faster but it was the longest day of hiking I’d ever done. My feet ached. I had mosquito bites swelling on both arms and I was still sweating buckets.

Charles never stopped being upbeat and was now leading us to keep me motivated. We crossed over to finish where the Perimeter is also part of the Mountain Goat Trail. I was glad the name didn’t describe it well, it was instead a paved old train rail bed.

About 1 mile from the end we both turned on our headlamps (something I never hike without). The pavement was pretty level but it was too dark not to need some illumination.

We actually were back at the trailhead by a little after 8. Although my pace had actually only been 1.9 mph average we had made pretty decent time considering all the trail misdirection. 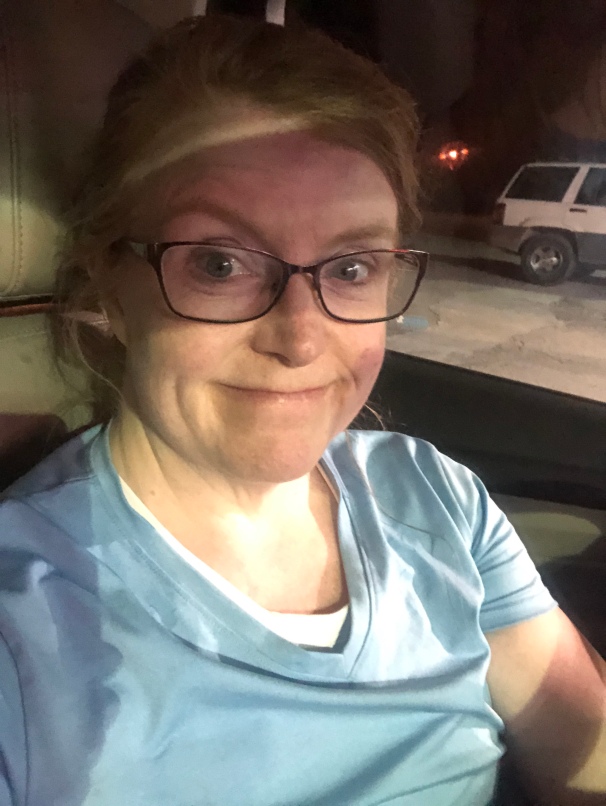 I thanked Charles heartily for having kept me from dehydration and what could have been an even longer night if I’d continued down wrong paths. Definitely hoping I can act as trail angel and repay some of his kindness when he heads on the AT next spring.

Afterwards I didn’t celebrate with a big meal at Shenanigans although it was highly recommended.

Instead I stopped at the only convenience store in town, which had one cooler door of water and ten of beer (college town). I grabbed a couple of waters, extra strength Tylenol and a pack of chocolate Zingers.

I found my AirBnB cottage right off of the campus where the host had left the light (and A/C) on for me. I proceeded to take a long shower, then ate the Zingers with a glass of wine, drank about a liter of water and went to bed.

The trail had ended up being a little over 22 miles with our detours. I learned my lesson on predicting trail speed, not packing enough water, and how blessed I was to have someone come along to save me from myself.

With so many more adventures to make my #50for50 it is tempting to try and rush through them. But I also need to appreciate the adventures I have already experienced and build on the lessons I am learning. I don’t want to waste time getting lost or being unprepared.

*special thanks to John Teasley for suggesting this challenge for my #50for50 – I had never heard of it before and had never been to Sewanee!