This week I finally started what will be a monthly adventure in making a food I’ve never attempted before as part of my #50for50. Yes I’m a month behind so I will be doing another next weekend. The postponement was necessary since our kitchen sink is undergoing some maintenance right now.

I made rice pudding because I wanted to treat Mike, my partner, to something he really likes for Valentine’s. Rice pudding turned out to be easier than I had expected.

Although I did have a few grains that were still a bit crunchy. Mike said overall taste was good.

Instead of considering that falling short I decided to embrace the perspective that I didn’t scorch it and I can always make it again better. I also learned the key to it was keep stirring.

The key apparently to me making progress in swimming is to keep swimming.

Earlier in the week I was literally in tears over a random woman’s comment in the YMCA locker room. All she said was, “That was a short swim. But you do what you can.”

There was no malice, but I perceived it as a little judgmental. After all I knew my workout had been underwhelming. I still was having such a hard time with breathing anxiety that I could barely get a stroke or two in. So her comment made me feel like I haven’t been trying hard enough.

Two days later when I was at my swim lesson however I felt a real breakthrough. Like something “clicked” and my swim coach said she could see a real improvement. I actually could freestyle more than 2 strokes before breathing. And I didn’t die.

Again I was almost in tears but this time in a surge of a tiny triumph. I am more certain than ever that I can keep swimming. I celebrated by buying myself a new YMCA logo swim cap.

This weekend to further my progress in my Tri training I went looking for a road bike. It’s probably important at this point in my story that I admit I haven’t rode a bike on the road before.

Growing up I wasn’t allowed to ride my bike in the street. Instead I could only ride in the yard.

Our front yard had a faint dirt track on the edge from hundreds of circles I did. Maybe not hundreds because I always felt fairly clumsy on it.

A few years back Mike bought he and I mountain bikes. I have yet to ride it up, down or even around a mountain. I have only rode it on the Oklawaha Greenway here in Hendersonville. A paved, bike and pedestrian friendly path. We actually haven’t even rode the bikes but once since we moved right down the street from the greenway.

Now that you know that training for the bike part of the Tri will be almost as imposing as the swim, I think it will help frame the rest of my weekend.

I am happy to report I found an older model Specialized Dolci in my size and in good, used condition. 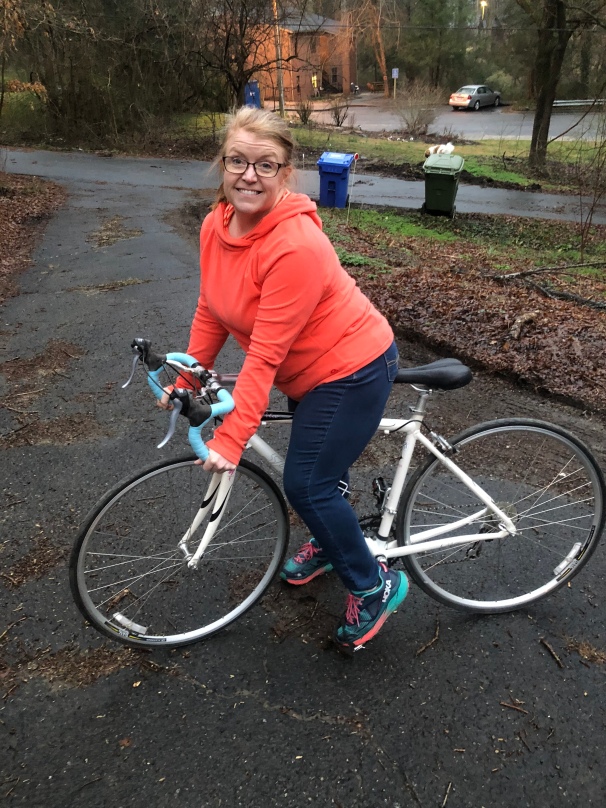 Afterwards, Mike and I drove his car along the route for the Asheville Triathlon.

It was both picturesque and frightening. Quite a few steep hills, extremely tight winding curves. At less than 12 miles it is certainly something I could manage now that I can start training on the bike and have 153 days to get ready.

Then this morning I decided to look at a Triathlon I had heard about on one of my Facebook groups.

The Rambling Rose, another Sprint Tri, is the exact same day but in Greenville, SC. That’s about an hour in the opposite direction.

But it is women only AND the distances are even shorter than the Asheville Tri.

So if I decide to do this Triathlon instead am I selling myself short? Did the Asheville Tri bike route really scare me that much? Will I regret not going the slightly longer distances if I switch?

The answer turns out to be in deciding what I choose as my perspective.

If I sign up for Rambling Rose with the perspective that I am taking the easy way out, or from a position of fear, then I am definitely setting myself up for negative feelings afterwards.

However if I can use the shorter distances to go “balls out” (as some of my Triathlete lady friends suggested), and can use the odds in my favor of increasing my confidence level then I think I can be proud of my choice.

When I embarked on the #50for50 I knew I’d have decisions to make along the way. This is my journey ultimately and how I choose to tackle each of these new challenges is part of the deal.

I choose to see the progress and keep a positive perspective regardless of what I encounter along the way.

2 comments on “Pudding, Progress and Perspective”